A Love for Eric Dolphy 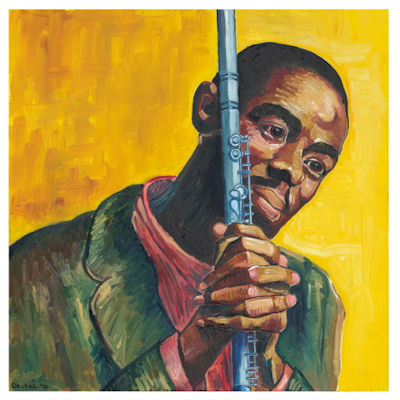 I first ran across Eric Dolphy when for some reason Eric Clapton mentioned him in an interview in Rolling Stone and so I assumed he was a blues guitarist. Little did I know. I asked my Mom to give a record of Dolphy for a birthday present. It was “Live at the 5 Spot” with Booker Little, Mal Waldron, Richard Davis and Eddie Blackwell.

That was it, I was hooked. There were two cuts, one to each side. Eric played bass clarinet on “Aggression” and flute on “Like Someone in Love”. I had been playing flute for about 6 months and I could tell that for me there wasn’t much room in rock music for flute though it was Traffic and the Blues Project that first pushed me towards the flute.

But Eric was something different. It was very birdlike and the virtuosity was amazing. He used the entire range of the instrument with wide intervallic leaps, a time sense that allowed him the freedom to begin and end his phrases wherever he wished, it was Charlie Parker on hyperdrive.

Everything I’ve read about Eric points to a kind and gentle soul about whom no one ever said an unkind word. Even Charles Mingus called him a saint. Born in 1928, it was apparent from an early age that he was musically gifted, and it was under the tutelage of Lloyd Reese in Los Angeles (who also taught Dexter Gordon, Buddy Collette, Ben Webster, and Charles Mingus) that his talent blossomed.

He was a master of flute, alto saxophone, and bass clarinet and I believe that his work on flute and bass clarinet has yet to be matched. It is also sad that had he been a white man he would have been able to make a living as a studio musician or in a symphony orchestra, but neither of these options were open to him being a black man in America in the 1950’s.

Unlike many jazz musicians he had classical training having studied flute with Socorso Pirrola and Elise Moennig and knew the repertoire. It is this training combined with his knowledge of Charlie Parker that makes his approach so unique. He subdivides the beat into a myriad of possibilities, not just 3/2, but 5/2, 7/1, 9/1. There is a transcription available of his masterpiece “You Don’t Know What Love Is” (available here at my store published by Hal Leonard) that is on the CD Last Date.

The introduction to “You Don’t Know What Love Is” is in the key of E major then shifting to F minor when the bass comes and he plays the head in an improvised obligato and then plays two choruses, followed by a piano solo and then a wonderful cadenza. The solo is remarkable because of the juggling of the rhythms keeps the choice of notes consistently fresh. There is a judicious use of chord extensions #11, b9, b13 and altered scales, but for the most part his playing is inside the changes.

I am enclosing a solo transcription of Dolphy’s flute solo on “17 West” off the “Out There” album made by my friend trumpeter Graham Bruce in Napa, Ca. This is a quartet without piano, just cello, bass and drums. The form is a 12 bar blues but an interesting aspect of this is the bass line which does not play the roots of the chords. The solo uses for the most part a Bb7 scale with a b3 and b13, but again, it’s how he juggles his rhythmic line that pushes everything continually forward. Have fun!

I have Giclee prints of Eric Dolphy available in sizes ranging from 10″x10″ to 24″x24″, the size of the original. Prices vary depending on whether it’s framed, matted or just the print. Contact me at steved@mcn.org 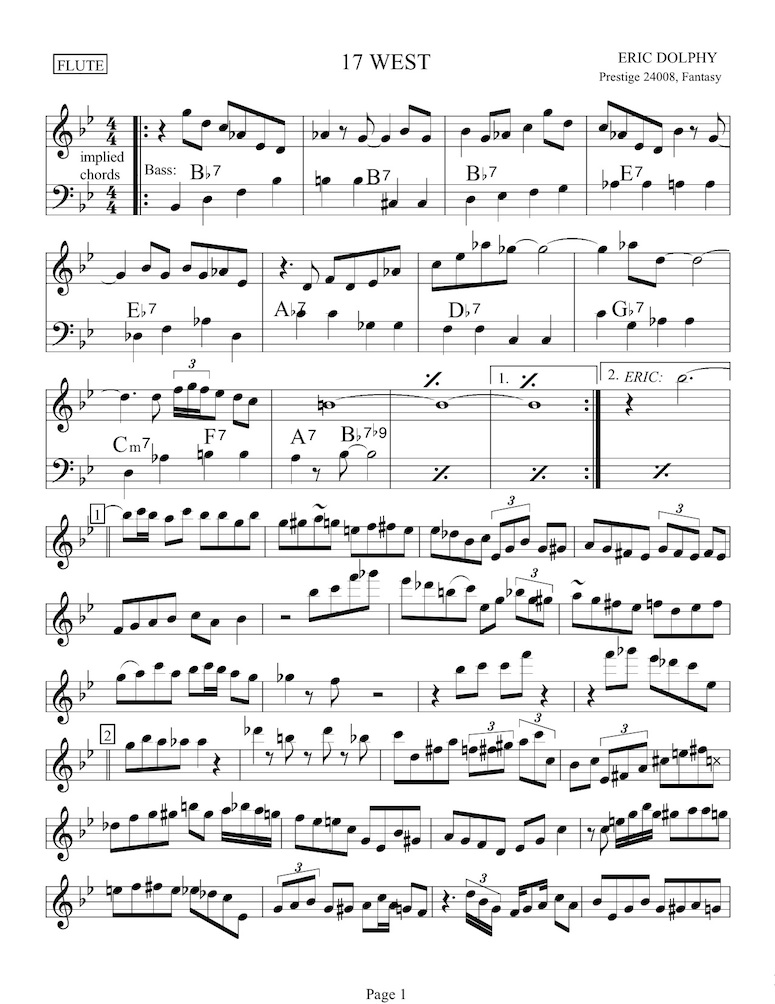 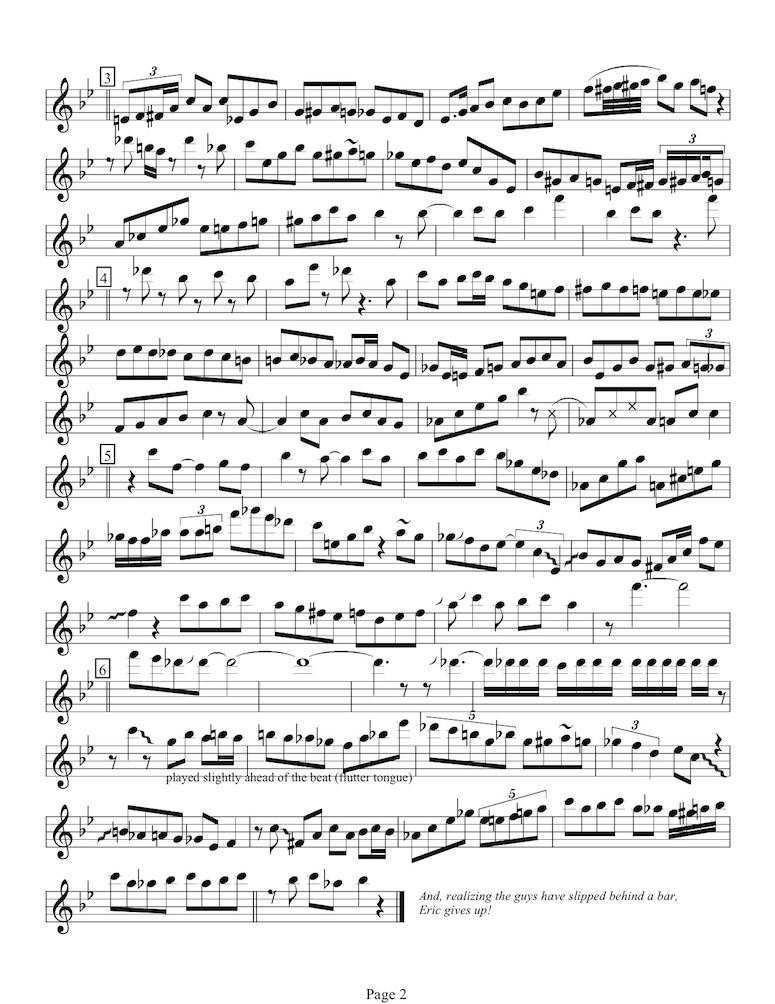