I have been playing flute and saxophone since 1968 when upon falling in love with the group Traffic I just had to buy a flute. I taught myself how to play and read music and six years later went through the music program at the College of Marin. Attending the Ali Akbar Khan school of Indian music for a year was a life changing experience for me. Since then I have had a variety of musical experiences; singing Beethoven’s 9th, playing with a punk rock band, big band, Latin bands, leading my own group, and playing with Johnny Tolbert and de Thangs for the last 10 years.

I continue to support myself today by playing music, repairing flutes, saxophones and clarinets in my own shop, teaching and painting, and through the grace of God will continue to do so for many years to come.

Having been a musician for seven years, my curiosity got the better of me. 30 years ago I received my first set of flute pads from George Koregelos at the House of Woodwinds, and some advice on how to do a repad. Sitting at my kitchen table it took three days to complete the work. It played! Not as great as could be but not bad for the first time out. I decided to get into repair seriously a year later for 2 reasons: 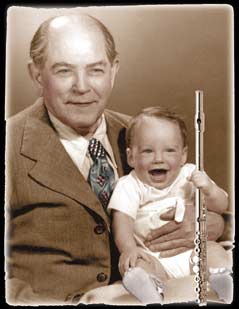 I served a year and half apprenticeship at Marin Woodwinds with Mike Irwin, worked for myself for 10 years, spent 15 years at Best Instrument Repair in Oakland with Dick Akright, and am now self-employed again.

I have been playing with Johnny Tolbert and De Thangs for 12 years. As you can see from his bio he is the last of the real black bluesmaen and he is the real thing. This band is tight and ready.
Legendary Blues Guitarist
Johnny Tolbert
P.O. Box 3846, Berkeley Ca 94703
510-843-8132

Those who know Rhthym and Blues music history agree that Johnny Tolbert is one of the most influential and innovative musicians on the scene today. Tolbert has toured as guitarist and musical director with musical giants Sam Cooke, Etta James, Little Willie John, and Aretha Franklin. In 1991 he completed and extended road tour as lead guitarist for the great Bobby”Blue” Bland.

Born in Kilgore, Texas, Johnny grew up in a gospel family, his grandmother and father being ministers. Though Gospel and Country &Western were the major musical influences of his chidhood, Johnny was exposed to Blues and Jazz in a big way after his family moved to Oakland California in the late fifties. His early performances included church events, talent shows and high school dances.

He wrote and produced the debut recording of soul star Joe Simon and work with Big Mama Thorton as guitarist and arranger on “Chaffeur Blues” and “Ball and Chain”. His career and creativity are now in full stride, and his achievments as a guitarist, poet, composer and song stylist have been a source of inspiration for countless musicians and entertainers. Johnny Tolbert is truly one of Oakland’s and The United States’ unique musical treasures.